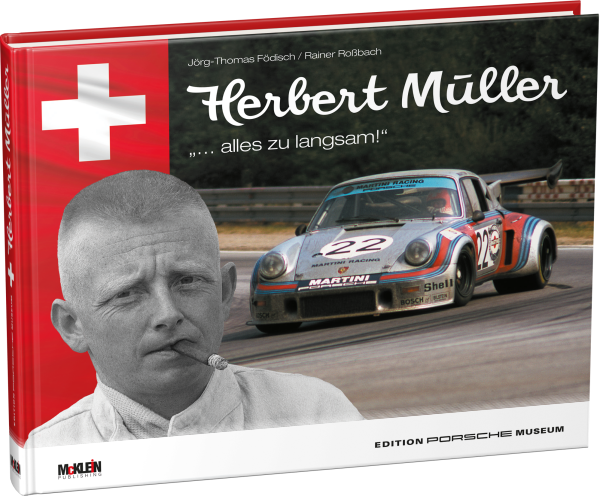 McKlein, the specialist publisher of fine motorsport books, now brings Müller's racing career and his personal story into print. It covers the full range of his skills and the colourful mix of cars that he drove. Sadly, that story came to a tragic end at the Nürburgring in 1981. Now, just in time for the fortieth anniversary of that sad date, the authors recall the unprecedented career of the racing businessman and the cigar-smoking jack-of-all-trades in all cockpits.

Born in 1940 in Menziken, Switzerland, Müller first completed an apprenticeship as an electroplater in his parents' company. At the age of twenty, he had already had his first experience of serious motorsport and immediately achieved respectable successes. He quickly made a name for himself and was soon a regular in the cockpits of the big manufacturers from Ferrari to Matra and then to Porsche. In 1966, he scored a sensational victory in the world-famous Targa Florio in Sicily driving a Carrera 6, which he repeated a few years later. Among other things, he also drove the over-1,000 bhp Porsche 917/30 from one victory to another in the spectacular Interserie.

Fans remember "Herbie" and his successes far beyond the borders of Switzerland. Memories of family members and many contemporary witnesses enrich this racing story that is also a comprehensive biography of a motorsports competitor who rose to the top on merit. Of course, it would only be worth half as much without the sheer unbelievable wealth of first-class photos from Europe's most renowned archives, including many that have never been seen before in public.

Pictures and illustrations: 253 in colour and 257 in black-and-white

Information on the authenticity of customer reviews can be found here.
From: Tom Dexterhaven On: 4 Dec 2021