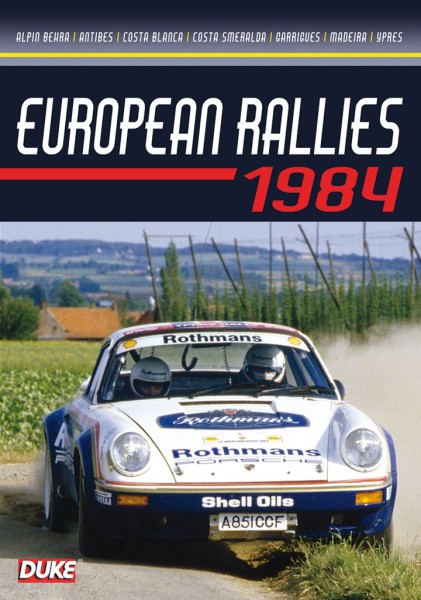 Description Evaluations 0
Description
The Rally RACE Costa Blanca in Alicante, Spain, featured epic mountainous stages with steep... more
Close menu
European Rallies 1984 DVD
The Rally RACE Costa Blanca in Alicante, Spain, featured epic mountainous stages with steep drops, twists, turns and hairpins and was the eighth round of the European Rally Championship. The rally took place over a total distance of 1272km and included 46 special stages. However, out of these 46 stages only 10 would be held in daylight and with only three hours of sleep, drivers had to focus and push hard through the night-time stages. The Rallye des Garrigues took place over 18 stages around Nimes. It attracted one of the best entries with more than 100 competitors. With the sun in the sky and temperatures warm, hoards of spectators gathered in at the roadside to catch a glimpse of top pilots like Guy Frequelin, Henri Toivonen, Jean-Claude Andruet and Bruno Saby.
The 27th running of the Rallye Alpin-Behra saw top drivers Jean Ragnotti, Henri Toivonen, Guy Frequelin and Didier Auriol. The Costa Smeralda Rally will best be remembered for the heroics of Henri Toivonen in the Rothmans Porsche 911. He arrived at the rally on crutches after injuring his left foot in a go-karting accident - and won. The Ypres 24 hour rally was filled with constant action as Henri Toivonen, Patrick Snijers, Carlo Capone and Jimmy McRae battled for first place. Coming into the Madeira Rally, just one point separated the leader Henri Toivonen and Italian Carlo Capone. It was a cracking battle between them. Toivonen didn’t take part in the Rallye d'Antibes after sustaining a back injury during the 1000 lakes rally. It came down to a fantastic fight between eventual winner Capone, who would secure the ERC crown in 1984 and Bernard Béguin in the mighty BMW M1.
Extra Feature: Milles Pistes 1984 on the Plan de Canjuers, a military camp in the southeast of France.
Related links to "European Rallies 1984 DVD"
Evaluations 0
Read, write and discuss reviews... more
Close menu
"European Rallies 1984 DVD"