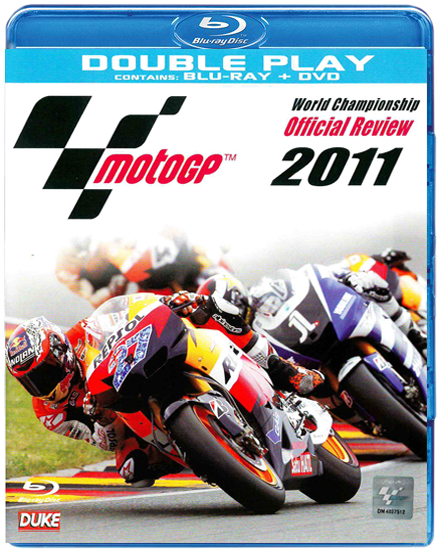 Description Evaluations 0
Description
A flurry of team changes ensured the 2011 MotoGP World Championship would be unpredictable,... more
Close menu
MotoGP 2011 Review Blu-ray and DVD
A flurry of team changes ensured the 2011 MotoGP World Championship would be unpredictable, dramatic and, often, controversial from the first green light. The Official Review, once again available on the High Definition Blu-ray, features the hottest action from every race, using the best footage from aerial, trackside and on-bike cameras, including the breathtaking gyroscopic views.
There are interviews, bonus features and informed commentary to ensure you get the full story of a season packed with highs and lows. Reigning World Champion Jorge Lorenzo, still on the works Yamaha, started favourite, however, Casey Stoner took no time to get to grips with his new Honda mount and soon emerged as the leading title contender. Dani Pedrosa’s hopes were, again, hit by injury, but the Honda star still produced some outstanding performances - not least in the epic Japanese GP. A switch to the works Yamaha for Ben Spies showed he has the makings of a future World Champion, and then there was Marco Simoncelli … villain to some, hero to others the one thing he can never be called is boring!
Making almost as many headlines as the championship battle was Valentino Rossi’s battle with his wayward Ducat. The Doctor and his team kept working hard all year, giving his legions of fans hope the move from Yamaha will pay off, eventually. Enjoy all the vital highlights in stunning HD, and with unrivalled picture and sound quality.

MotoGP The Route to Glory DVD
MotoGP is the pinnacle of motorcycle racing, and the World Championship is the ultimate goal which only a handful of the very best will achieve. This fascinating programme reveals how Grand Prix World Champions are created, discovering the Route to Glory.
Many of today’s greatest MotoGP stars open their hearts to discuss how they got started, the influences, challenges and emotions which shaped their journey to the top and how they have coped with the absolute joy and massive pressure of becoming World Champion.
The programme features extensive, intimate interviews with Valentino Rossi, Jorge Lorenzo, Nicky Hayden, Casey Stoner, Dani Pedrosa , Andrea Dovizioso, Alvaro Bautista, Hiroshi Aoyama, Julian Simon, Mike di Meglio and Britain’s own Bradley Smith. Plus we hear from legends Wayne Rainey, Eddie Lawson and Kevin Schwantz on what it takes to become World Champion.
There’s stunning race footage as we watch the stars progress from national championships, into Grand Prix racing and on to their first points, first wins and first championship victories. But most revealing is the early footage, including personal home videos, showing Rossi racing karts as a child, Pedrosa and Lorenzo on dirt bikes, Aoyama and Dovizioso on mini-motos and Hayden in his very first road races.
Each racing great reveals their personal Route to Glory, comparing the benefits of motocross and mini-motos in the early years, the involvement of key figures like Alberto Puig, the lucky breaks, the sacrifices and the determination to succeed. They recall the emotion of their Grand Prix debut, the passionate commitment it took to win, how they deal with injury and setback, and explain what they think it takes to become World Champion. These men are among the chosen few to have challenged for MotoGP World Championship victory, and this is the story of their Route to Glory.