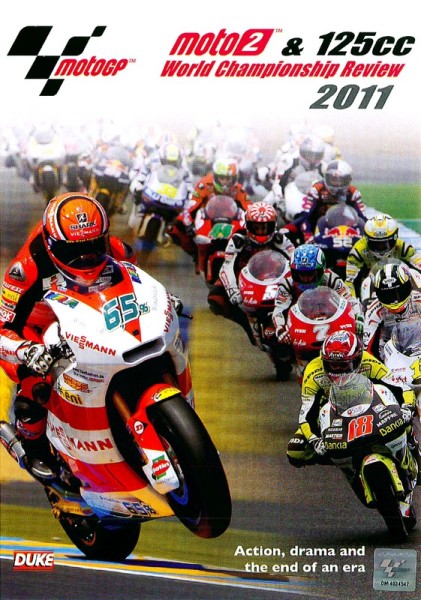 Description Evaluations 0
Description
Action, drama, passes, crashes and two scintillating title battles - this is the Official Review... more
Close menu
Moto2 + 125cc Offical Review 2011 DVD
Action, drama, passes, crashes and two scintillating title battles - this is the Official Review of the 2011 Moto2 and 125cc World Championships. Featuring qualifying and race coverage from all 17 rounds, it is the definitive record of a spectacular and history-making year.
The very best footage captures all the vital highlights and season-defining moments as we relive two thrilling championship chases, including the very last year for the 125cc class. The Official Review is filled with breathtaking elbow-to-elbow racing and plenty of headline-making drama from both championships.
The Moto2 World Championship continued its reputation for fierce competition, with Stefan Bradl and Marc Marquez going head-to-head for the title. While Marquez took more wins than his German rival, Bradl's season-long consistency ensured he was crowned World Champion at the final round, in only his second season in Moto2. Andrea Iannone was, once again, in sparkling race-winning form, and the season came to a fitting end when Gresini rider Michele Pirro took his maiden victory.
The final 125cc World Championship was nail-biting right down to the final race of the season. Nicolas Terol dominated the top step of the podium, winning eight times, but could not shake off the challenge of Johann Zarco, whose remarkable consistency saw him finish in the top 6 at every race - except the title-deciding final round! This world-class championship battle was a fitting end to the 125cc class, and with the stunning rides by Maverick Vinales and British hopefuls Taylor Mackenzie, Harry Stafford, Danny Kent and Danny Webb, this review is world-class viewing.