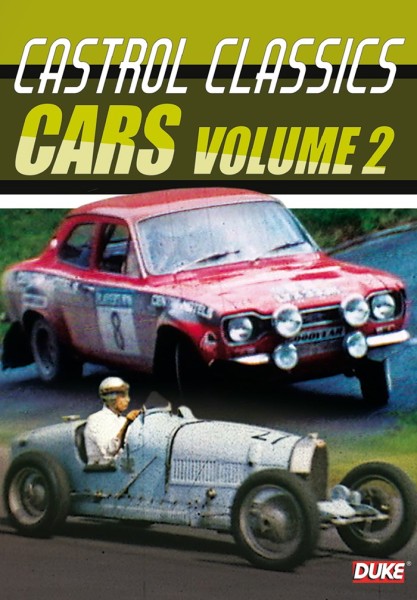 Raymond Baxter is also the voice of 'International Rally 1952'. That year's RAC Rally had split starts in Hastings and Scarborough and travelled over 1800 miles around Britain. Ian and Pat Appleyard give details about their preparations of their famous Jaguar 'NUB 120'.

Across the North Sea now for the Tulip Rally of 1954, a colourful affair that pitted a multi-national field against 2000 miles of road rallying through Holland.

'British Racing Green' is the final entry in this compendium, showcasing a full day of motor-racing entertainment, including a rare outing for the Ferguson P99 four-wheel-drive Grand Prix car at Silverstone for the British Empire Trophy and a demonstration lap of legends such as Kay Petre, Tony Rolt and George Eyston at Oulton Park.

At Silverstone we see John Surtees, Stirling Moss, Jack Fairman, Bruce McLaren, Roy Salvadori, Graham Hill, Jim Clark and Tony Brooks. Run to Intercontinental formula, the event was the swansong of the 2.5 litre Grand Prix formula. In a wet race Stirling Moss, in a Cooper-Climax T53, was untouchable, although John Surtees and Hill gave it their all.

Goodwood and the International Tourist Trophy sees another drive for Moss in British Racing Green - although ironically in this event he's behind the wheel of a Ferrari, doing battle with the Aston Martin of Roy Salvadori.