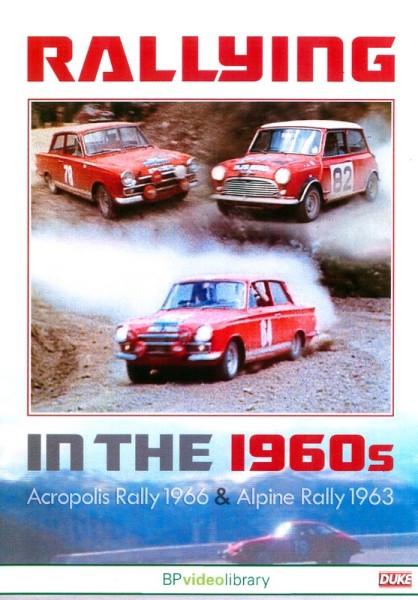 Lap of the Gods
This is an action-packed record of the 1966 Acropolis Rally, considered the roughest and toughest European motoring event. For two days and two nights, more than 100 crews fight a gruelling battle against heat, appalling roads and continuous eye-stinging, throat-choking dust. We follow the full story to its controversial conclusion, enjoying the sights and sounds of classic cars from Mini, Saab, Sunbeam, Volvo, Ford and more being pushed to the limit by legends including Roger Clark, Paddy Hopkirk, Timo Makinen, Rauno Aaltonen and Gunnar Andersson. Maxwell Boyd narrates as we enjoy the action, including in-car footage, and interviews with the stars.

Works Entry
Narrow mountain roads are the setting for this film, following the progress of the 1963 Alpine Rally. Passing through the towns, villages and picturesque countryside of the Maritime Alps, this was an arduous, car-breaking event, and a rally which provided plenty of entertaining footage for the enthusiast. From watching the crews gather for the start in Marseille, we relive the whole adventure - including the challenging road and weather conditions! There's a wonderful collection of cars, including Mini Cooper, Reliant Sabre, Hillman Imp, Saab 96 and Austin Healey 3000. Among the stars are Erik Carlsson, Rauno Aaltonen, Vic Elford, Timo Makinen and the Morley brothers, Donald and Erle, heroically chasing a Alpine Gold Cup hat trick.