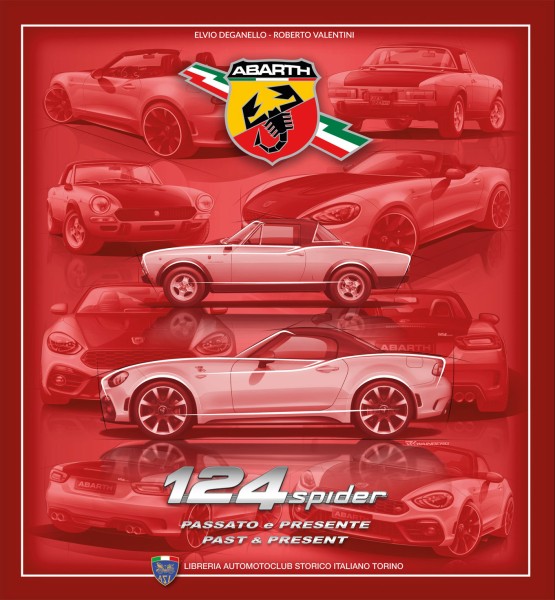 Fiat 124 Sport Spider burst onto the sports car market in 1966 with its elegant lines and the world's first twin-shaft engine driven by a toothed belt. Private drivers immediately appreciated its great road qualities and used it in both speed races and rallies. In 1970, privateers Alcide Paganelli and Ninni Russo won the Italian Rally Championship; in 1972, privateers Lele Pinto and Gino Macaluso, assisted by the manufacturer, won the Central European Championship (Mitropa Cup). In the same year Abarth prepares the absolute weapon for the Squadra Corse, which becomes official. In three years of rallying at the highest level, the Fiat Abarth 124 Rally enters the legend by seizing numerous victories and winning the European Championship in 1975 and the Italian Rally Championship in 1974 and 1975. In 2016, the model long regretted by enthusiasts returns in an all-new, ultra-modern and technological guise, which in every way draws on the great tradition of the past. The book recounts the evolution of the 124 Sport Spider in its various capacities and of the 124 Abarth Rally and summarises their racing history in seven chapters. Finally, it covers the genesis of the new Abarth 124 from its design to its racing debut. The texts are supported by more than 300 images, many of which have never been published before, detailed technical specifications, lists of "racing" plates and other important documents for the knowledge and correct conservation of the models.
The authors, Elvio Deganello and Roberto Valentini, have divided their responsibilities: Deganello - appreciated journalist and competent ASI technical commissioner - has taken care of the historical part; Valentini, who has had the opportunity to follow the development of the 2016 model step by step, narrates this new exciting adventure in the world of rallies. The photographs from the Actualfoto archive are essential, allowing us to relive the competitions of the past.

Ruben Wainberg, designer of today's Abarth 124, worked on this book with passion, dedicating himself to its graphic design together with Patrizia Bisa, art director of La Manovella Magazine. The chapter on the stylistic transition between the old and the new Fiat 124 model is worthy of note, thanks to the skilful pen and inventiveness of Roberto Giolito, author of a cult model such as the new 500. Today Giolito is the head of FCA's Heritage Hub and thus represents the relationship between the great history of the brands that are part of the group and its legacy. Just as announced in the title of the book: Past and Present.