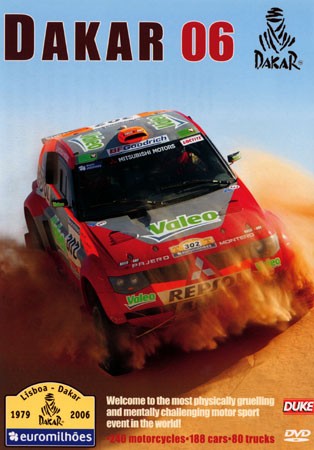 Description Evaluations 0
Description
Since its creation in 1978, the popularity of the Dakar has grown stronger and stronger every... more
Close menu
Dakar 06 DVD

Since its creation in 1978, the popularity of the Dakar has grown stronger and stronger every year. But the event has always remained loyal to its founding values: to be a unique sporting competition in the heart of Africa, experienced by all, amateurs and professionals alike, as an extraordinary human adventure.
This year's route followed some of the world's most testing yet breath-taking terrain from Portugal through the Sahara to Senegal. The 2006 event was dominated by the battle between Mitsubishi and VW and attracted some of the greatest names in motorsport: Stephane Peterhansel, Luc Alphand, Carlos Sainz and Jutta Kleinschmidt competed among the 188 cars, while Marc Coma and Cyril Despres were challenging for victory in the bike category.