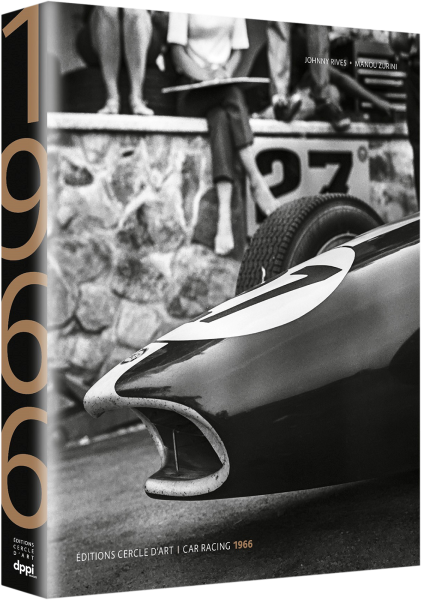 Car Racing 1966 focusses especially on drivers, at a moment when these daredevils held hero status. The year 1966 saw the continued rise of the new French hero, Jean-Pierre Beltoise, who faced off against the young Jackie Ickx and another stranger to fear, Henri Pescarolo. The legends of French motorsport were already on the scene.

Of course, there is no shortage of talent from elsewhere in these pages, names like Jack Brabham, Graham Hill or Bruce McLaren… The kings of road-racing also attracted crowds, who waited at mountain passes and on backroads to watch drivers like Timo Makinen, Rauno Aaltonen, Pauli Toivonen, Tony Fall, Gilbert Staepelaere and Jean Rolland.

Turning to the cars themselves, the Ford GT 40, Alpine, Ferraris, BRM, Lotus, Mini Cooper and more, apotheoses of design and mechanical thunder, outdared each other continuously in pursuit of the top spot, in rallies and endurance races such as Le Mans. Indeed, it was in 1966 that one of the authors of this work, Johnny Rives, got to drive the n° 53 car down the Hunaudières straight. The drivers, whether at Le Mans, in hill-climbs or on the first circuits of what had not yet become the full circus that is Formula 1, were universally accessible and welcoming, smiling at amateurs and the media, who were not yet clustered in droves around the route or track. Amazing memories!

Information on the authenticity of customer reviews can be found here.
From: Anonymous On: 12 Jul 2019