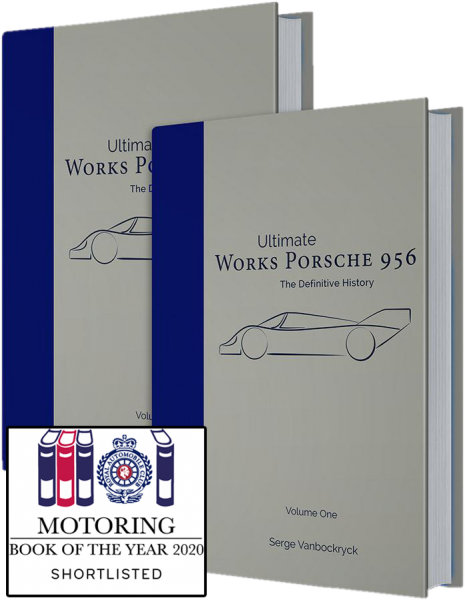 This product is currently not available.
Please inform me as soon as the product is available again.
€530.00 *

These two volumes add up to 800 pages, which we believe makes it the biggest book ever written on the subject.
- Porsche racing heritage: the book examines the evolution of Porsche’s racing endeavours in the 30 years before the 956’s introduction, from the first Gmünd coupés of 1951, through the iconic 917s of the early 1970s, to the last Indy-engined 936/81 of 1981.
- The 956’s design and development: the work of Norbert Singer and his team is covered in exhaustive detail and numerous never-before-seen photographs, including design stages, wind tunnel models, prototype construction and testing at Weissach.
- The 1982 season: the story of how the Works 956s took endurance racing by storm from the outset, taking the top three places at the Le Mans 24 Hours and winning the World Endurance Championship titles for both manufacturers and drivers, the latter for Jacky Ickx.
- The 1983 season: a totally dominant year saw Porsche retain its championship titles, with superstar driver Stefan Bellof bringing youthful brio alongside the works team’s experienced hands; his taking of pole position at the Nürburgring and then crashing in the race through over-exuberance has gone down in sportscar racing legend.
- The 1984 season: while a protest about last-minute rules changes led Porsche to boycott Le Mans, the works team carried on as before with lots more success and a third manufacturers’ championship.
- The 1985 season: the 962C was now the works team’s weapon of choice, but occasionally 956s were pressed into service as stand-ins and extras.
- The people: all the works drivers of the 956 era are profiled, plus engineers Norbert Singer and Roland Kussmaul; the drivers are Jacky Ickx, Derek Bell, Jochen Mass, Vern Schuppan, Stefan Bellof, Al Holbert, Jürgen Barth, Hurley Haywood, Hans-Joachim Stuck, John Watson and Henri Toivonen.
- Chassis histories: exhaustive detail about every works 956, technical details and reports of every test and every race, from gear ratios to compression ratios, gathered by the author from sifting through thousands of pages of period documents in Porsche’s Stuttgart archives, by conducting dozens of interviews with people significant to the story, and by attending Group C races around the world in the 1980s and 1990s, as well as many historic races, gatherings and auctions.
- Asides: the background to the relationship between Rothmans and the works Porsche team, and the innovations brought by Rothmans in televising the action worldwide and filming from on-board cameras.