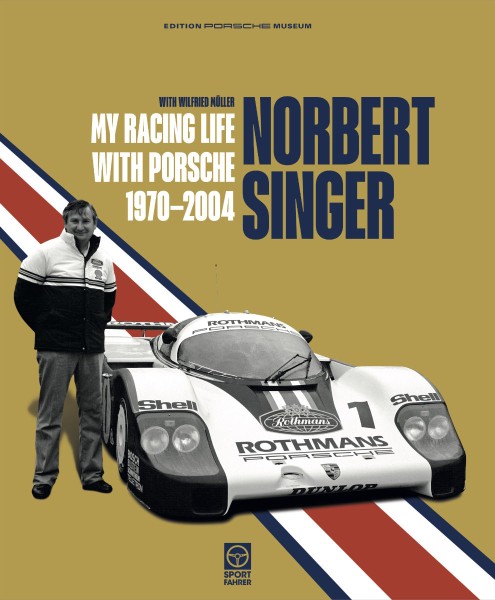 As we now know, the gearbox was reliable, Porsche won the race, and Norbert Singer stayed loyal to the German carmaker for decades to come. To celebrate Singer’s 80th birthday, Sportfahrer Verlag brings you Norbert Singer: My Racing Life with Porsche 1970-2004 What started out as a plan to update an older book has, through many conversations between Singer and author Wilfried Müller, grown into a comprehensive and detailed autobiography.

Across 16 chapters and more than 350 pages, Singer describes the greatest era of Porsche racing to date from his own unique perspective, that of a visionary race engineer and aerodynamicist, and cunning tactician and interpreter of rules. From the 917 to the 911 Carrera RSR, to the world championship-winning 935, to the lightest (735 kilograms) and fastest (366 km/h) 911 in history. Singer also details the background of the three-time Le-Mans-winning Porsche 936.

As with the Carrera Turbo RSR and the 935, Singer was the project manager for the ground-breaking Porsche 956. The car wrote Porsche into the motor racing history books. Singer successfully took the ground effect aerodynamic concept used in Formula 1 and applied it to two-seater sports cars. At the time it was the pinnacle of Singer’s passionate search for downforce. Drivers like Jacky Ickx, Stefan Bellof, Derek Bell, Jochen Mass and Hans-Joachim Stuck hit new heights in terms of cornering speeds in these 800-horsepower cars, collecting five world championships along the way.

In the mid-1980s, Porsche ventured into unknown - and, as it turned out, very difficult - territory with its single-seater programme in the American Indycar series. Singer details the tumultuous saga from the inside. A more enjoyable recollection is the artful transformation of a racing prototype into a Gran Turismo car, the Porsche 962 Dauer LM GT which conquered Le Mans in 1994. Continuing the GT1 theme, Singer led the development of the first mid-engine 911 in 1996, one of those cars then winning at Le Mans in 1998. It was the 16th triumph for Porsche at the world’s most famous endurance race. Singer was involved in every single one of them as an engineer, and in most of them as a tactician and strategist as well. His detailed recollections of those 24-hour marathons make up much of the book, from his ducking and weaving from a CEO to an improvised air lift for parts.

At the end of the 1990s, the man with the reading glasses always sitting low on his nose designed the groundbreaking aerodynamics on the LMP2000 Spyder - only for the car to be resigned to secrecy in a hangar. The famous Carrera GT supercar also had Singer’s touch in the wind tunnel. As Porsche boss Wendelin Wiedeking said at the time: ‘Tell Singer to come up with something!’ After retiring Singer continued to support customer teams at the track until 2010, before moving into a university lecturer role to pass on his knowledge to the next generation of engineers.