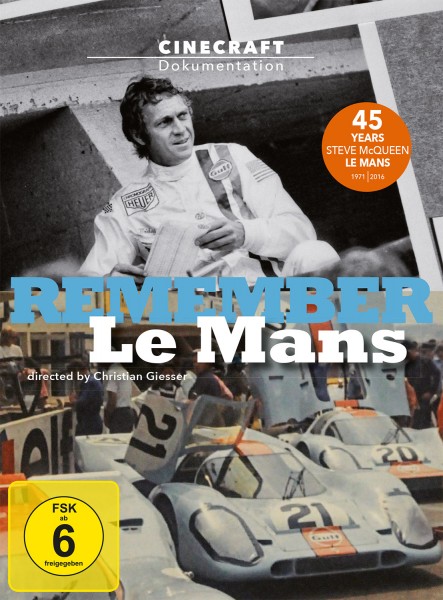 Description Evaluations 0
Description
In 1970, Hollywood actor Steve McQueen took a film crew consisting of 200 people to Le Mans to... more
Close menu
Remember Le Mans DVD
In 1970, Hollywood actor Steve McQueen took a film crew consisting of 200 people to Le Mans to make a very realistic movie on his passion - motor racing. McQueen himself played the lead role in the titanic fight for Le Mans glory between Porsche 917s and Ferrari 512Ss. It took more than one year and numerous adventures for one of the greatest motor racing movies of all times to be ready and it became as iconic as the 24-Hour race itself.
Now, 45 years later, Filmmaker Christian Giesser and Le Mans stuntman Erich Glavitza together visited the shooting locations and met some of the leading characters from the former film crew. Thus this impressive documentary takes the viewer behind the scenes of the making of “Le Mans”. They spoke to US film producer Peter Samuelson, Porsche racing legends Herbert Linge, Willi Kauhsen and Jürgen Barth as well as production assistant Dr. Christian Riml and stunt man Peter Huber. They have also had access to previously unseen historic sequences taken by camera car driver Linge plus footage from Jürgen Barth’s private archive all of which make the documentary interesting even for those who do not understand the German speakers.
All in all, “Remember Le Mans” is an impressive insight into the making of the legendary Le Mans movie as well as an entertaining journey in time back to the wild 1970s when Steve McQueen was the highest-paid Hollywood actor and when racing drivers were still regarded as true heroes.