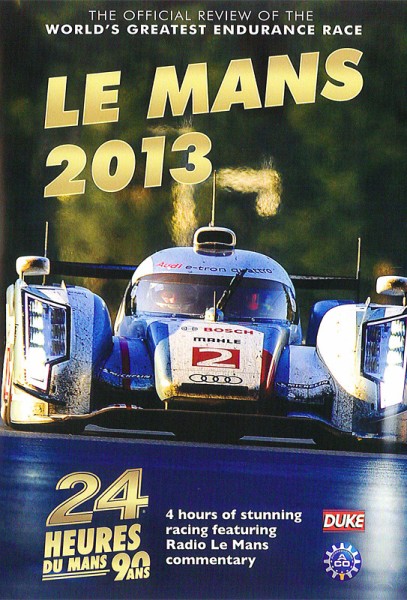 There was plenty of interest throughout the field with an astonishing 41 teams finishing the gruelling 24 hour assault on the Circuit de la Sarthe.

The official review contains all of the highlights from the 2013 24 Hours of Le Mans.

The 2013 24 Heures du Mans marked the 90th anniversary of the world's most prestigious motorsport event.

The 2013 race was run in some of the worst conditions in recent memory, pushing drivers and their cars to the very limits and making it the most tense and dramatic meeting for many years.

As expected the LMP1 class came down to an epic duel between the all-conquering Audi R18 e-tron Quattros and Toyota's innovative TS030 hybrid. Through torrential rain, André Lotterer led the charge for Audi until a crank sensor problem forced a lengthy pit stop and threw the race wide open once more. Alan McNish, Kristensen and Duval pushed hard but Audi and Toyota were fighting tooth-and-nail to the very last lap.

In the LMP2 class OAK Racing was the dominant force with their Morgan-Nissan cars proving very potent endurance racers. Bertrand Baguette, Martin Plowman and Ricardo Gonzalez put in an impressive performance given the extreme conditions encountered to prevail over team mates Pla, Brundle and Hansson by just one lap after 24 hours of full-on racing.

Porsche had reason to celebrate a special Le Mans landmark in the GTE classes as victory in both Pro and Amateur divisions took their overall Le Mans victory tally to 100.
The highlights of the 90th anniversary 24 Heures du Mans are dedicated to the memory of Allan Simonsen who lost his life during the race.