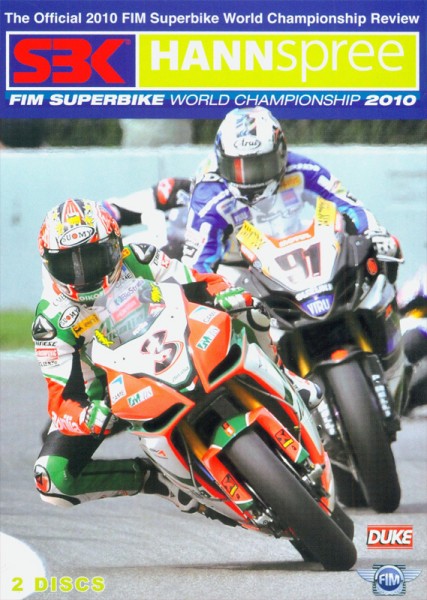 Description Evaluations 0
Description
The Superbike World Championship delivered yet another scintillating season of some of the... more
Close menu
World Superbike Review 2010 2-DVD-Set
The Superbike World Championship delivered yet another scintillating season of some of the closest two-wheel racing you'll see anywhere in the world.
This comprehensive review brings you the very best highlights from every single one of the 26 action-packed races, bringing you the full story of the title chase from all 13 rounds of the Superbike World Championship. All bets were off as the season got under way, but it soon became clear veteran Max Biaggi had a rocket ship in the shape of the nimble Aprilia, while Leon Haslam was determined to make his mark on the Alstare Suzuki. While this pair would battle for the title down to the penultimate round, when the Roman Emperor would celebrate victory on Italian soil, the strength of talent throughout the field was simply staggering. Enjoy elbow-to-elbow racing featuring Carlos Checa, Michel Fabrizio, Troy Corser and one of the strongest British line-ups ever seen in the series - including Cal Crutchlow, Jonathan Rea, James Toseland, Shane ‘Shakey' Byrne, Leon Camier and Tom Sykes. Plus Nori Haga makes a late season charge after a disappointing, by his high standards, campaign.
All the vital passes, clashes, shocking crashes and emotional victories - not least Crutchlow's Silverstone domination, are here for you to relive all over again in the very best action footage.