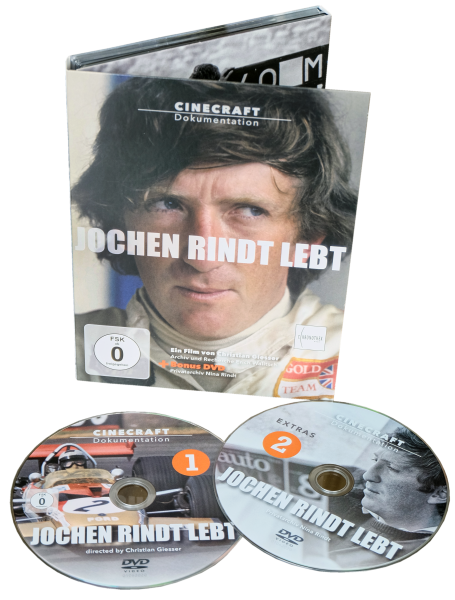 “Jochen Rindt lebt” is a documentary by Christian Giesser and the Jochen Rindt historian Erich Walitsch about the Formula One world champion of 1970.

The film gives insight into an octane-rich life lived on the rev limiter. It covers Jochen Rindt's life from his childhood, through his school days, his first car, his first racing successes, and his career in Formula One right up to the tragic accident in Monza.

Friends of Jochen talk on film about the dangers in motorsport at that time, where split seconds were enough to decide between victory and defeat, while fragile chassis parts could mean the difference between life and death.

This documentary includes previously unreleased and private footage of Rindt's family, and of his racing driver friends. Also, for the first time, Rindt's half-brother and a cousin appear before the camera and talk about childhood times with Jochen. Competitors and friends like Jackie Stewart, Dr. Helmut Marko and Helmut Zwickl contribute on the subject of the man as a driver and the phenomenon that was Jochen Rindt.

Through years of meticulous searching, private film material that had never been shown before has been found in attics, cellars or other long forgotten places at the homes of people who knew or worked with Jochen Rindt.

This new edition of the film includes an additional bonus DVD which includes forty-five minutes of archive material supplied by Nina Rindt, to whom special thanks are due for making her entire film archive available.