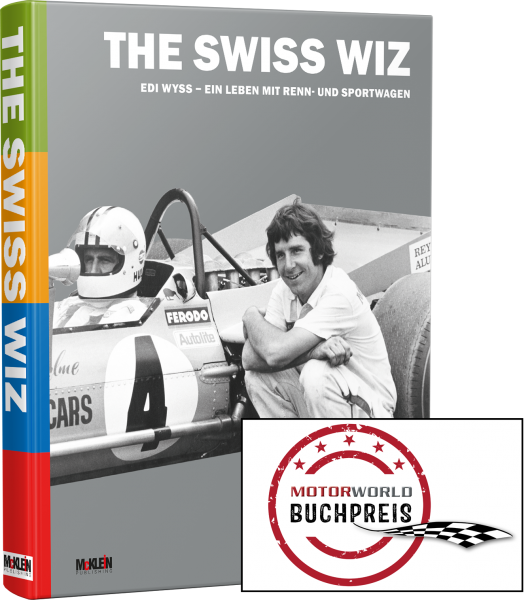 "The Swiss Wiz" was the nickname of Edi Wyss when he was a race mechanic in England at McLaren around 1970. The play on words sounds like "The Swiss magician" and characterizes precisely what was most appreciated about him, his absolute mastery of technical craftsmanship and his hands-on way of quickly finding a creative solution for every problem in the racing car.

In his autobiography, Edi Wyss tells how his passion for racing and sports cars led him, at a young age, first to the Swiss racing scene and then to the international racing circus around the globe. He has experienced successes with may of the personalities with whom he worked, including Joakim Bonnier, Denny Hulme, Andrea de Adamich, Peter Gethin, Alain de Cadenet, David Weir, Gordon Johncock, Herbert Müller, Jo Marquart, Clay Regazzoni and Peter Sauber. He was deeply affected by the loss of two particularly close friends and acquaintances, Bruce McLaren and Jo Siffert. After adventurous projects as a designer of racing sports cars, he returned to the Zurich Oberland where, in the "Moschthüsli", a converted farmer's workshop, he created a small, very special workshop where collectors of top-class historic sports and racing cars have their valuable cars restored and looked after.

The book offers a glimpse behind the scenes of racing in the 1960s and 1970s, the booming racing scene with historic vehicles of more recent years and the business of restoring high-quality sports cars in the present day. It appeals to readers on several levels, since in a very personal style, Edi Wyss reviews his life story in four stages. As a direct participant, he can provide authentic comments on the numerous pictures, some of which are published here for the first time, often with a twinkle in his eye. From a historical perspective, informative texts describe the organisation and character of the racing disciplines in which Edi was involved. His companions contribute further, memorable episodes to the colourful hustle and bustle of the scene. His personal "tabular race diary from 1969 to 1989" traces his assignments as a race mechanic and the list of the two hundred Ferraris who have passed through his hands at Edi Wyss Engineering complete the picture of his extraordinary career.

Images and documents: ca 360 in colour and 185 in black-and-white

Information on the authenticity of customer reviews can be found here.
From: Helena Zaugg On: 10 Apr 2021