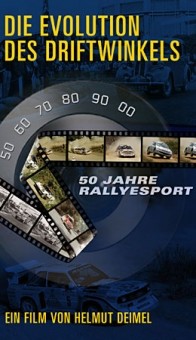 This film is the German version of "The Evolution of Rallying"

"The Evolution of Rallying" tells the story of the last five decades of top rally sport, and how we know it today. It is a documentary of arguably the most lively and fascinating type of motorsport. The movie picks up the action in the mid -fifties- an era when the days of gentleman rallying and more touristy endurance tests came to an end. In Scandinavia, the home of rallying, automobile enthusiasts back then began testing their skills on closed forest roads, in an attempt to find out who really was the fastest of the fast. Of course, driving sideways was not a new phenomenon, but then came drivers like Tom Trana and the great Erik Carlson, and time and again they led the art to new heights. 90 minutes of how it all began as the adventurous hobby of some enthusiasts and let over five decades to a merciless sprint contested by professional works teams. 90 minutes for enthusiasts and connoisseurs.