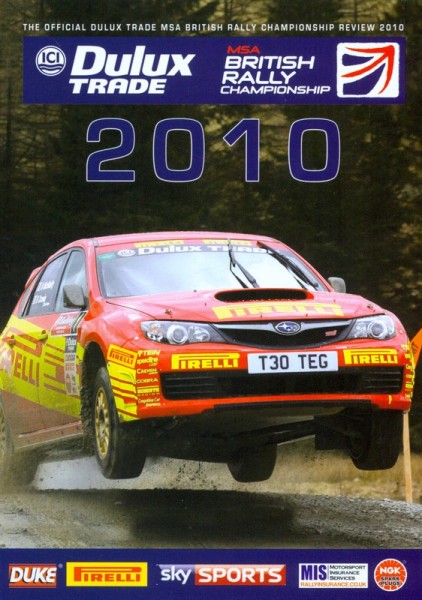 Description Evaluations 0
Description
The 2010 Dulux Trade MSA British Rally championship delivered one of the most thrilling... more
Close menu
British Rally Championship Review 2010 DVD
The 2010 Dulux Trade MSA British Rally championship delivered one of the most thrilling title chases ever seen, with a staggering six drivers still in with a chance of taking the crown on the very last round.
The Official Review features comprehensive coverage from all six rounds as the stars cope with mud, gravel, tarmac, massive dust clouds, heavy rain and many, many punctures! Amazing camerawork, plenty of in-car footage and expert analysis from Robbie Head ensure you get the full story of every thrilling down-to-the-wire finish, every heart-breaking mechanical setback and every shocking spin, roll and crash.
Reigning Champion Keith Cronin looked like he could dominate the season with a commanding win in his Subaru Impreza at the Bulldog International Rally North Wales, but he soon found his title hopes under pressure from veteran Gwyndaf Evans, whose experience and amazing talents saw him take his Mitsubishi Evo 10 to a hat-trick of wins. Meanwhile, Craig Breen impressed in his all-new Ford Fiesta S2000, keeping his title hopes alive to the very last round, and Jason Pritchard, Jonny Greer and Alastair Fisher ensured they stayed in the mix with some stunning drives.
From the dust clouds of the Kielder Forest over the wet roads of the Isle of Man to the title-deciding special stages of Yorkshire - the Official Review is the complete, action-packed story of the amazing 2010 MSA British Rally Championship
Bonus features: In-car with Craig Breen in Kielder Forest on the Pirelli International Rally - in-car with Gwyndaf Evans on the West Baldwin stage at the International Rally Isle of Man