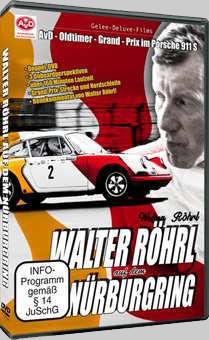 Please inform me as soon as the product is available again.
€29.95 *

On the second DVD, Walter Rörhl comments his best laps and his moments "on the limit", as well as memories of his career and races on the "Ring". He also give advices to every driver who would like to attend a drive on the Green Hell and tells where to be aware of the dangers and traps on the track.

The film was shot during the 2011 AvD-Oldtimer-Grand-Prix, which gathered historic cars from the first racing cars to the cars of the 1960s like the Aston Martin DB4, Jaguar E-Type, Ford Mustang or Porsche 904/6 and which has become one of the major events on the historic scene.

What's waiting for you:
+ A double DVD
+ 3 different onboard cameras
+ 165 minutes of film
+ the Grand Prix circuit and the Nordschleife
+ Walter Röhrl's comments about his race
+ an interview with Walter Röhrl