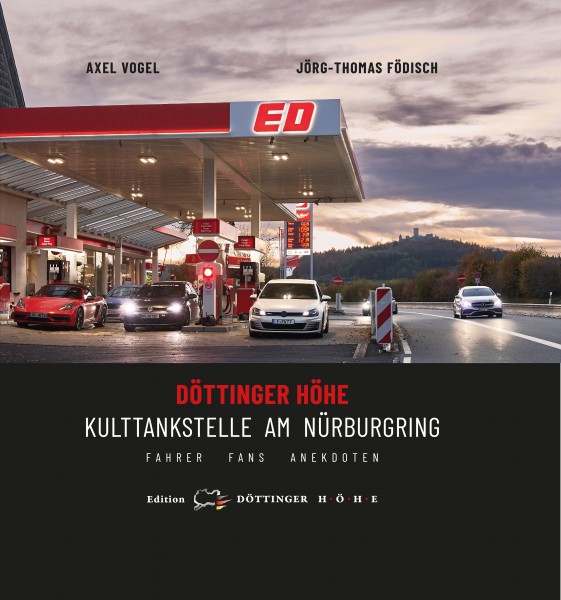 Description Evaluations 0
Description
Anyone who knows the Nürburgring also knows the legendary petrol station at the... more
Close menu
Döttinger Höhe - Kulttankstelle am Nürburgring
Anyone who knows the Nürburgring also knows the legendary petrol station at the Döttinger Höhe. Hans-Joachim Retterath runs the family business, which is actually a combination of petrol station, restaurant, hotel and shop for everything to do with motorsport. He has now opened his famous attic with the memories of 90 years of Döttinger Höhe: sensational pictures, fabulous anecdotes about racing drivers as well as racing fans.
The Döttinger Höhe. That's not just a field name and, of course, the name of the extremely fast long straight of the Nordschleife. "Much more than just a petrol station," it says on the homepage, namely a meeting place, news centre, shopping mile, collector's mecca, living room substitute and canteen. "You have to experience it for yourself. Of course, you can get fuel here, too."
The petrol station is as old as the Ring. "Retti's" grandpa Jakob Degen recognised the signs of the times and added a petrol pump to the family business. Daughter Anna and her husband Silvester Retterath continued to run the business until 1972. Son Hans-Joachim Retterath built the hotel and is still the boss. He, whom everyone calls "Retti", is far more than just a businessman; for him the Nürburgring is a passion, and thus he is part of the history of the "Green Hell". What he has to tell barely fits between the covers of the book.
It contains the most beautiful of the thousand and one anecdotes that took place around the "Döttinger Höhe". After all, not only has practically every motorsport great been there at one time or another, but even more celebrities. Legendary was the day when Retti helped out Emerson Fittipaldi, who ran out of gas on the Ring not far from the petrol station, with a jerrycan, legendary too were the wintertime “elephant meetings” of hardy motorcyclists or the music festival "Rock am Ring". In addition, there is an olfactory creepy case of racing-cyclist doping, a strange visit from behind the Iron Curtain and much more.
The Degen/Retterath family has experienced the glamour and glory of the Nürburgring just as closely as the regularly recurring crises. There is a lot to tell. And to this day, the occasional and regular guests from the surrounding area, from all over Europe and beyond, appreciate this just as much as the accommodation, the cuisine and the abundant supply at the petrol station, where, of course, you can get fuel, too.