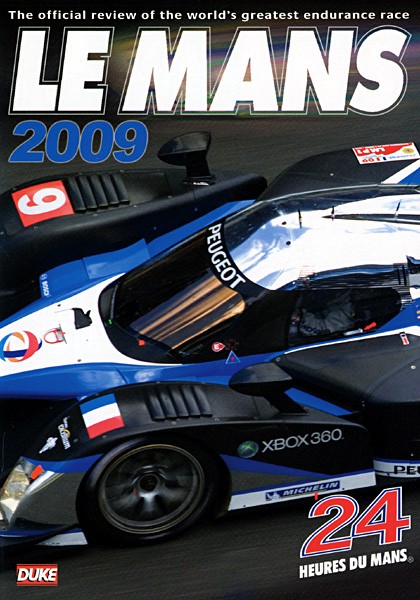 The Official Review features dramatic and action-filled footage from all four classes, bringing you explosive highlights from more than 3,200 miles of racing. There's also behind-the-scenes access, interviews with the stars, special features and much more to bring you comprehensive coverage of the 2009 Le Mans.

Peugeot was determined to claim victory and finally break Audi's five year domination of the race. Once again it would be a battle of the diesels as Peugeot's tried and tested 908 HDi FAP took on the all-new R15 TDi, Audi's latest challenger. The French marque's outright pace put it at the front of the field, while reliability issues dented to hopes of 2009 victors Allan McNish, Rinaldo Capello and Tom Kristensen.

After 24 hours of hard-fought competition and incident-packed racing, it was the Peugeot of David Brabham, Marc Gene and Alex Wurz which would score an historic and well deserved victory in the LMP1 class, leading home teammates Sebastien Bourdais, Franck Montagny and Stephane Sarrazin.

The Official Review brings you all the highlights of the diesel duel, plus the thrilling battles for honours in LMP2, GT1 and GT2.