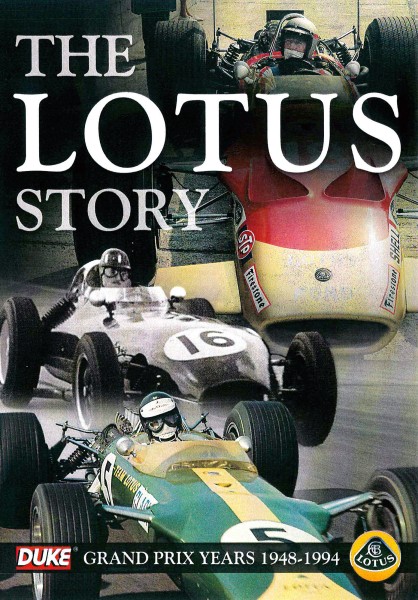 Description Evaluations 0
Description
Team Lotus rose from humble origins to become one of the most significant forces in motorsport in... more
Close menu
The Lotus Story DVD
Team Lotus rose from humble origins to become one of the most significant forces in motorsport in the 1960s and 1970s. Forever synonymous with heir charismatic and innovative founder, Colin Chapman, the British manufacturer continues to fascinate long past their days of spectacular success in Grands Prix.
Neville Hay’s four-part history of the team, their cars and key personnel traces the story of Lotus from their backyard beginnings in 1948 through to the death of Chapman and the beginning of the end for the F1 team.
The Creation of the Chapman Legend deals with the birth of the company to the early Grand Prix racing days. Featuring archive footage, interviews with Chapman’s friends and family, and drivers such as Graham Hill, Jim Clark and Innes Ireland, plus a look at the early careers of Keith Duckworth and Mike Costin of Cosworth.
Time of Change: A decade on from its foundation Lotus was running into problems and Colin Chapman was increasingly aware a reversal of fortune depended on a change of course. The result? The Lotus 18 designed and built in collaboration with Keith Duckworth.
The Golden Years From 1963 to 1968 Colin Chapman, Lotus, and Jim Clark really forged the legend of marque. Winning F1 World Championships, Indianapolis and multiple other world and domestic titles, the team seemed nearly unstoppable. Especially when they oversaw the development and debut of the excellent Ford Cosworth DFV in 1967.
The Final Chapman Years. Team Lotus retained their technological edge into the 1970s, scoring GP successes with racing legends Rindt, Fittipaldi, Peterson, Ickx and Andretti driving the excellent Lotus 72, the innovative Lotus 78 and the ground effects 79. The untimely death of Chapman deprived the team of their guiding light and F1 success dwindled.