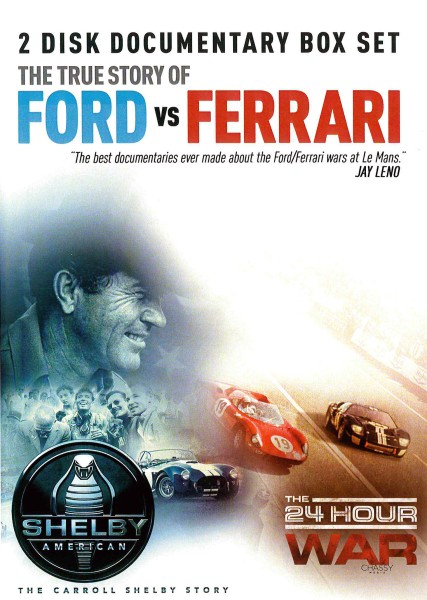 This product is currently not available.
Please inform me as soon as the product is available again.
31.90€ *

Shelby American
Carroll Shelby came from humble beginnings working as a chicken farmer in rural Texas. He exploded into the auto-racing scene by beating all the top-tier drivers of the era and winning the 24 Hours of Le Mans in 1959. All while still wearing his chicken-overalls. Carroll had a heart condition that nearly killed him, forcing him to retire from racing. He started Shelby American and assembled a rag-tag team of hot-rodders to execute his vision of building groundbreaking sports cars like the Shelby Cobra. He also led Ford and the GT40 to multiple victories at Le Mans over Ferrari. Shelby’s cars, driven by the greatest drivers in the history of racing, cemented his legacy. He is the only man in history to win Le Mans as both a driver and a manufacturer. And is still the only American auto-manufacturer to win the World Manufacturing Championship.

The 24 Hour War
The Ford versus Ferrari rivalry at Le Mans is one of the most famous battles in racing history. It started in 1963 when Henry Ford II tried to buy Ferrari to save the ailing Ford Motor Company, which was being crushed by GM and the Corvette on the track and at the dealerships. Ferrari was the most successful racing team in the world at that time. After months of intense negotiation, Enzo Ferrari said no - refusing to allow Ford to interfere with what he loved the most: racing. Henry Ford II was furious and vowed to build a racecar that would dethrone Ferrari. Ford engineered a revolutionary racecar called the GT40. The battle would be at the most famous race in the world, The 24 Hours of Le Mans, where Ferrari had reigned supreme for decades. In the 1960s only the two teams ever won Le Mans.