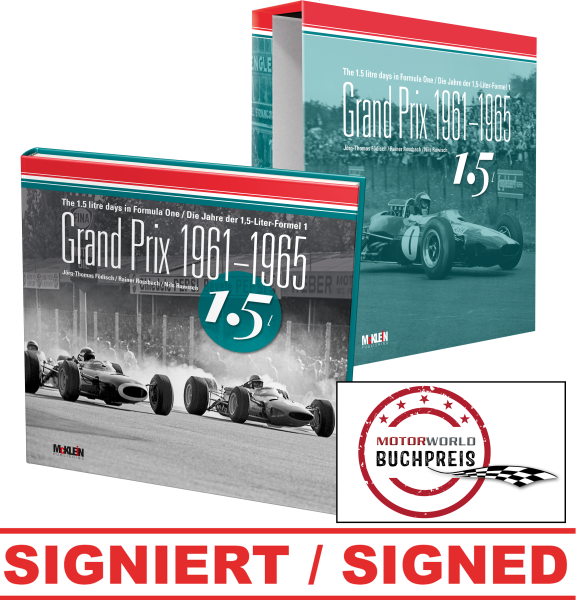 This product is currently not available.
Please inform me as soon as the product is available again.
99.90€ *

From January 1st, 1961, a new set of technical regulations were applied in Formula One. From that date, all the naturally aspirated engines had to be of a maximum displacement of 1.5 litres in an attempt to reduce the speeds. The power of these engines was initially about 150 bhp though, at the end of the era, this had risen to more than 220 bhp. At first the Formula One cars of that time were underestimated, which was being unfair to the achievements of the engineers and of the drivers involved. To operate these cars at their limits demanded a high level of driver skill.
Initially the British teams had opposed the new rules and thus entered the new Formula One at a technical disadvantage. Ferrari was better equipped with new 1.5 litre engines and thus the Scuderia won both the Driver and the Constructor Championships in 1961 and was able to repeat this success in 1964. Lotus was just as successful with the outstanding Jim Clark, and BRM driver Graham Hill also won the title. After the British had caught up with engines like the Climax V8, Lotus also pointed the way into the future with the Type 25, the first monocoque Formula One car.
The 1.5 litre formula saw the participation of some of the best Formula One drivers of all time with Stirling Moss, Graham Hill, John Surtees, Dan Gurney, Jim Clark and Jackie Stewart. And despite all the prophecies of doom that the "new" Formula One would not be exciting thanks to a lack of engine power, some thrilling sport was on offer during this five-year period. These Grands Prix were also a real spectacle for the spectators, because they were very close to the action.
Jörg-Thomas Födisch, Rainer Rossbach and Nils Ruwisch reveal in this book - using many previously unpublished photographs of which most are taken from the Bernard Cahier archive - the attraction and excitement generated by the forty-seven Grands Prix that constituted the World Championships for Drivers under the 1.5-litre Formula One regulations.
Related links to "Grand Prix 1961-1965 - The 1.5 litre days in F1 - signed"
Evaluations 0
Read, write and discuss reviews... more
Close menu
"Grand Prix 1961-1965 - The 1.5 litre days in F1 - signed"